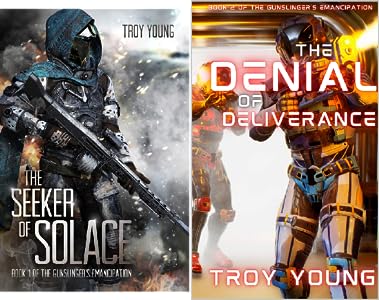 When I wrote the first book in the series, it surprised me at how quickly I could complete it.  I wrote an entire 63,000 word novel in only twelve days.  Most of my previous works took months to complete.  It was also my first sci-fi novel, and my first attempt at writing in first person. I found the overall experience a lot of fun.

The TV show The Mandalorian and the video game Red Dead Redemption inspired me.  Star Wars was always a space fantasy, drawing from samurai tropes.  The western genre and the samurai genre are closely linked, and The Mandalorian is a western.  I wanted to do something similar, so I based the setting off of Star Wars and the story off of Red Dead Redemption (the first one where John Marsden is hunting down the remnants of the Dutch Van de Linde gang).  I give my character a choice: die on the gallows or hunt down his former gang.

My story takes places in an intergalactic government called The Sector.  Within The Sector we have Neg Worlds and Prime Worlds.  Prime Worlds are the prosperous centers of trade and government.  Their citizens can go everywhere. Neg Worlds have a large variation to them.  Some are nearly as civilized as the Primes, while others are rough frontier worlds where The Sector presence is negligible.  Massive towers terraform the worlds; in the second book we learn the truth about the terraformers and that there exists an entire set of worlds that are not on the commercial star charts; planets where terraforming only progressed to a point, but were ultimately abandoned by The Sector.  These systems are without Sector presence, and no one knows they are there unless they find them by accident.

Too often I find worlds are generic in science fiction. Planets are uniform: a desert planet, an ice planet, a forest planet.  This is not our experience with our world, so why should our worlds in our stories be a single environment.

On one planet, the poles have shifted, so what was once a tropical paradise is now a frozen wasteland.  There is a gunfight in an abandoned, snow-covered waterpark.

Whenever I needed to add science to the story, I would research to get it right.  I would even put in some exposition to explain the science.  Like, my lasers, either from ships or handheld weapons, are not visible. Jumping to the warp has to be done outside the gravity of the planet. I account for the speed of a ship in orbit and the need to match it to move from one ship to another. A big part of my story involves body armor and the use of a spectral cloak to render the wearer invisible.  I researched exactly how this process might work and explained how it was done in the piece. I even account for the limitation of interstellar communications.

The one place I deviate from true science is not allowing cartridge ammunition from being fired in a vacuum unless accounted for (in reality there is enough oxidation in the propellant to allow it to happen, but I outlawed it unless the weapon was modified to allow for it).  I tried to keep the science correct wherever possible, except where the story was deemed more important.

What is the tech?

Databanks on the worlds within The Sector. Because your ship can operate away from Sector space, you tend to download any updates to your ship when you are in a civilized system.  One character’s ship’s databanks are out of date. Another, the Frontier Marshal, has access to a separate set of databanks that contains an extra level of detail, including the location of other worlds outside The Sector’s influence. The tech itself is nothing earth shattering, but really highlights how important information is. Knowledge is power.

Clean technologies.  If we can develop a cheap, clean, reliable energy source, it will change how everything is done.  It would help underdeveloped parts of the world expand and grow.  Access to clean power (especially cheap, reliable clean power) would be the first step in eliminating economic disparity.

My main genre I’ve written in is cosmic horror (Lovecraftian inspired cosmic horror).  It is my best sellers, and the niche I seem to have found my strongest voice.  I would never have suspected this as I started to write.