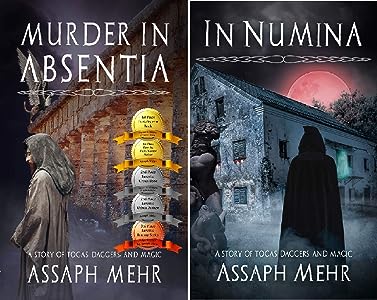 For our 100th interview we are joined by Assaph Mehr, here to tell us about his series Togas, Daggers, and Magic.

Imagine Ancient Rome, but where magic was real. Then skew it sideways (or flip it around), and take it to the logical extreme. I was always curious about ancient Rome (since I first read Asterix), with their engineering genius matched only by their political chaos. So when I added magic to the setting, I wished to explore both their pragmatic attitudes (over the Greek philosophical takes) as well as their religious and superstitious practices.

Since the adventures of my protagonist are of a classic, hard-boiled detective type and not tied to specific people and events, I constructed a fantasy world to house this society. Since it’s a mirror image of Rome, as it were, it also sits on the south side of an inner sea, and the setting borrows some Greek and Carthaginian elements.

I read both fiction and non-fiction about the period. A lot tends to involve the adventures of the notable people and events – from the Punic Wars, through the civil wars that ended the Republic, to the rise and initial relative stability of the empire. Fun as it is, I also try and read a lot about daily life rather than grand events. That’s where the mix of fiction and non-fiction works so well – read a well-researched historical novel, and go down the rabbit holes it leads in terms of exploring more of the “side” elements of society and culture.

Local universities were a great resource, where one can go and browse deeper research into the practices of magic and religion, superstition and culture. Add to that many online articles – academic and semi-academic – about new discoveries plus the obvious click-lists of exciting trivia, and you I have plenty of material to add a rich layer of real, complex, human culture to the basis of my fantasy world.

These are the stories I wish to read myself. I grew up on classic Sci Fi and Fantasy, I’ve always loved history and in particular ancient Rome, and I love reading detective stories. So, in writing, I combined all these elements into a paranormal detective on a background that is based on Rome. It was a natural extension of my interests and loves in reading.

If I explained it, it’ll cease being magical.

That said, the Romans had a very practical approach to life, and generally tended to absorb ideas and put them to good use – for example, despite their Graecophilia, they worried less about the philosophical implications of maths and instead brought engineering to new heights.

So there is a certain element of that that creeps in to the magic as well. Though mystical in origins, there is a collegium – a professional sodality – that tries to take a similar approach into repeatable magic. So it’a a balancing act for me, in giving the readers clues so they could see and maybe guess my protagonist’s actions, while still maintaining a certain sense of wonder at the larger world.

With gusto. I enjoy cooking, and I’m always curious about aspects of daily life in antiquity. Food is such a major aspect of life and it brings such a richness into novels, that I knew I had to incorporate it. So my protagonist is a bit of cheapskate, and does take note of what he eats when the occasion arises.

On my part, I also sent him to a garum factory when he needed some clues. Garum is a sauce made from fermented fish guts, which the Romans put on everything just like we’d use ketchup. Yum.

All readers have noted how the fantasy world comes alive via the food, so I think I did a good job there.

Easy. I do try to use real historical dishes in the novels – there are quite a few recipes that survive from the period – and I also play around with cooking them at home, or at least versions of them that are adjusted to modern kitchens.

Building on the garum above, there are a few alternatives. You could try to make some yourself – just layer fish and salt in a jar and leave in the sun to ferment for a few months – but that is not recommended to anyone with neighbours. There are Italian producers who try to make garum by reconstructing ancient recipes and methods, but those tend to be very hard to get and rather expensive.

The far easier alternatives for the modern cook are East-Asian fish sauce (like Vietnamese nouc mam or Thai nam pla), or Worcestershire Sauce. The East-Asian are your basic salty umami, and the only drawback is that when you add them to a hot pan it’s like nasal napalm. My family tend to wander into the kitchen asking why does it smell like dirty undies. Worcestershire sauce is gentler, but because it has tamarind it has a distinct tangy flavour. It might be a bit more similar to the Roman oxygarum – garum mixed with vinegar. Nothing that a drop of honey (mellogarum) won’t fix. You’ll find that adding a tablespoon of these to most sauces, gravies, marinades, etc. makes the end result deeper and richer. It does not give any fishy aftertaste, just a gives a more complex layering of flavours and umami. This is how I technically get around the “are there anchovies on the pizza?” questions, and everyone’s happy.

Surprisingly not much. One, the modern world has advanced much since the days on Ancient Rome, and that is largely A Very Good Thing ™. For example, I’m sure you’ll find plenty of articles about the lost secrets of Roman concrete and how it withstood for millennia. It’s true that the exact formula is unknown, but the general components and methods are known, and more importantly – we build far more efficiently these days.

When it comes to the magic itself, I’ve always enjoyed the escapist nature of fantasy – and I’d like to keep it that way. In real life I am very much a scientifically-minded realist.

This all started as a bit of a lark, when my wife said she had nothing left she wanted to read. I just started writing that night, and never stopped till I had the first book. It’s grown since to two full novels and a third on the way, a few short stories, and a novella (free on my website). Half the research I’ve done was for the fun of it, because I wanted to learn more regardless of any writing. All my readers have commented about the richness of the world of Egretia, about the level of detail that adds life and anchors them with a sense of place.

If you’re building your own fictional world, my advice would be to pay attention to the small stuff. Many people look at Tolkien, and think that they need languages and writing systems, political systems and massive histories. But remember that Tolkien was an avid linguist – he built Middle Earth as a playground for his languages, and everything else was to support that (and I’m sure you’ll find plenty of criticism about his sketchy geography or overblown histories).

Instead, identify first what it is that draws you to this world, what element brings it to life for you. Research into it, expand it, make it matter. For Tolkien it was languages, for me it’s the trivia of daily life and food – what is yours? When you find your element, it will shine through in your writing and leave readers with a memorable world.