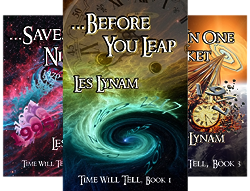 Today we have Les Lynam with us to talk about his series Time Will Tell.

Book Four takes place mostly in a post-apocalyptic Chicago with some scenes on the cusp of the apocalypse. The year is 2059 and I make some references to when self-driving vehicles became mainstream. With all of the advances in just the past year, I decided to change my referenced date from late 2030s to mid-to-late 2020s. I find forecasting near-future science much harder than far-future science because it seems we are quickly turning SF elements into real science at a much faster rate than 50 years ago.

The fun I’ve been having with this series is dragging my characters through some sub-genres.  Time Travel makes this possible. The first book takes place in 1995 (when my son was a teen), the second in 1969 (when I was a teen), the third hops around, but includes a visit to a space station in the latter part of the 22nd Century, the fourth (about 2/3 finished) is mid-21st Century in a mini-ice-age environment, the planned 5th book will finish things out in a Martian Colony in the late 22nd Century.  Our time traveler hales from the early 23rd Century, so everything is history to him, but the other characters get to have experiences in their pasts as well as their futures.

My protagonists are everyday people. When I started out this series, I was quite tired of reading books where there was a “the one” or “the chosen” character.  Don’t get me wrong, I’m a huge Dr. Who fan (and have seen every episode except a few Patrick Troughton series that have been miraculously found in the last few years). I’m fine with the Doctor having total control of the situations, but I wanted my characters to be people who you’d barely notice on the street. They struggle to make sense of the situations that they’re in.  Sean and LX’s realities are separated by two centuries and they have totally different perspectives on nearly everything.  Sean is wowed by some of his descendant’s techie toys, but LX is sometimes fascinated by the common things in Sean’s world. In one scene, LX is in awe of a big box store and marvels at the consumption driven society. He wanders through Wal*Mart as if it were a museum.

I try to make it plausible. Early on, when Sean asks about how the time machine works, LX counters with a question: “How would you explain an intercontinental jet excursion to your great-great-great-great-great grandfather who still thinks that the steam engine is either miraculous or the work of the devil?

“So sometimes I hedge on explanations.  I think my least plausible device is the pseudo-body suit, but shape-shifting is crucial to some elements of the stories, so I tell myself ‘if people can accept Star Trek’s transporter, they can give my pseudo-body suit a pass’.

What was the most mundane item that you used that really has cool tech behind it?  What is the tech?

Sean is basically tone-deaf but needs to be able to sing in a particular scene. LX gives him a couple of gumballs to bite down on (positioned in his farthest back molars).  They create a perfectly pitched sound bounced off the back of his throat, so all Sean has to do is shape the lyrics with his mouth to expertly ‘sing’ the song.

Any of it!  I love tech.  Always have.  I suppose if I could only make one thing real, it would be the time machine.

Genetically targeted weapons. Designer pathogens will be developed to take out the enemy with no ill effects on our own troops. I’m very pessimistic about mankind’s use of science. Weaponizing something always seems to get more funding than saving people or feeding the world. It seems to me that people create more and more ‘us vs. them’ categories every day.

Right now I have three of the five books completed, so look for books 4 and 5.