I am doing a special weekend extra interview this week. This time I am interviewing Adam David Collings about his latest novel Jewel of The Stars. This brand new release hits home with me as we are both writing about adventures that take place on a space cruise. 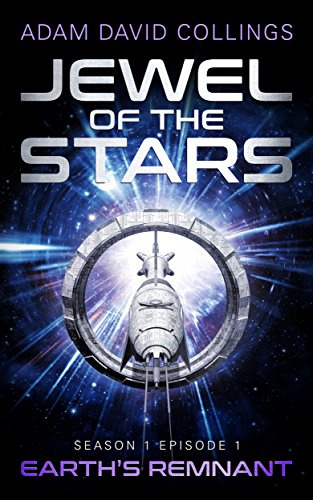 Jewel of The Stars is an episodic series of novellas. There will be six episodes in a season, and I have four seasons planned, with one epic story arc that ties it all together. I plan to release “season boxsets” in paperback form. It’s a long-term project, but an exciting one.

My original plan was for the cruise ship, Jewel of The Stars to be in the middle of a picturesque nebula. That’s how they avoid getting destroyed in the alien invasion. Since most of what I knew about nebulae came from Star Trek, I thought I’d better do some research. I was a little disappointed to learn that the gasses in a nebula are so sparse that if you were inside it, you’d see nothing. It’s only when you are a very long way from it, that it looks beautiful. My character, Braxton White, encapsulated my disappointment when he says “Scientific reality often spoils the romanticism of ignorance.” In the book. This discovery required some minor changes to the plot.

I grew up on Star Trek, which bases its Starfleet on the US Navy. Because of this, I naturally associate anything nautical with space. A few years back, my parents went on a cruise through the pacific islands. While listening to their stories, my brain immediately said “what about a cruise ship in space. Rather than visiting other countries, it would visit other planets”. That’s how my brain works. (Makes perfect sense to me.)

I then began to wonder how the crew and passengers of a cruise ship would react if Earth was invaded and became an occupied world. They’d be on the run, cut off from home. So, in this way, the plot was very much born out of the setting.

My story opens with humanity’s first contact with alien life (although evidence of aliens has been found in ruins on another world). This means that we’re seeing my world right at the beginning of its dealings with other species. And they don’t get off to a very good start. Space opera often starts later, where dealings with aliens are commonplace.

The idea of a cruise ship in space is reasonably unique. There have been one or two examples, but it’s still pretty fresh. This is interesting, because on one hand, they’re always on the look-out for food. At the same time, they’re on this luxurious ship with swimming pools, shops and restaurants.

Also, most my characters are civilians. They are out of their depth in both a literal and figurative sense. Not only that, but they’re completely on their own. No other ships to back them up.

Jewel of The Stars is space opera, rather than hard sci-fi, so I have the usual fare of “magic” technologies, such as warp drive, teleportation and artificial gravity. However, I have limited these somewhat to give a slightly more realistic feeling.

I mention real-world scientists Harold White and Miguel Alcubierre as being early pioneers of the warp drive. I don’t delve into how the drive works, or what some of the real-world theoretical shortcomings of the technology might be (I don’t claim to understand that stuff). In my world, the warp field around the ship is generated by a ring, inspired by Dr. White’s conceptual IXS Enterprise image.

While Jewel of The Stars has artificial gravity, the shuttles don’t. This means that once they leave the shuttle bay, those on-board experience zero-gravity.

I limited my teleporters by saying there needs to be both a sending and receiving station. This means you can’t just beam down to an unexplored planet, because there’s no teleportation chamber down there. This felt a little more realistic to me.

The Helix Nebula, mentioned in the book, is real. The alien ruins mentioned above were found on Kepler 22b, which is a real planet, although it seems that in real life, this may be a gaseous planet, rather than a rocky planet, as it is in my story.

The characters in my book use virtual computer user-interfaces, projected by contact lenses. These eye lenses, as I call them, are worn by all members of society. With recent innovations, such as google glass, this type of augmented reality is not so far-fetched. It seemed a logical extrapolation from a world where everyone has their nose in a mobile phone, to a world where everything is poking their fingers at virtual interfaces that only they can see.

It would be really nice if teleportation was real. Airfares are so expensive. It’d be nice to be able to just beam to the other side of the planet in seconds. Of course, this benefit would only be fully realized if teleportation was cheap or free. The other downside is that it might take away some of the romanticism of travel.